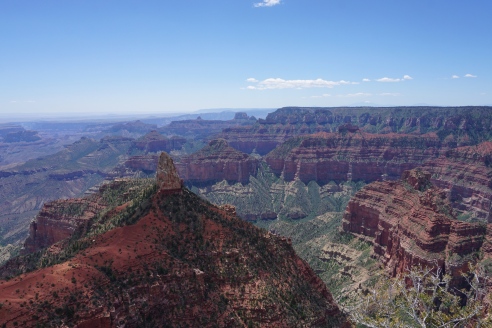 Five million people a year trek to the Grand Canyon, which is considered one of the seven natural wonders of the world. The national park is so large that most visitors explore it over a few days. It is split into two areas, the North and South rims. 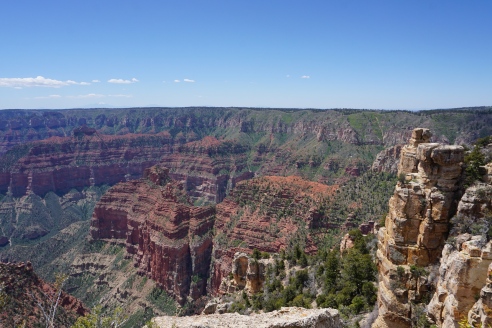 While the South Rim is more popular, we loved exploring the North Rim too. At its deepest point, the canyon is 6,000 feet and 18 miles across, according to park rangers. The Colorado River carved the canyon’s geologic formations.

Traveling from Utah, we stopped at the North Rim first then hiked the South Rim the following day. Park officials suggest visitors drive to Point Imperial to see the highest point and to Cape Royal for a scenic view.

Take a short walk to Roosevelt Point, where you can stand or sit at one of the park’s many relaxing benches while enjoying the view. Walhalla Overlook features an ancestral Puebloan site, officials said.

We loved the Cliff Springs Trail, which is, at least, one mile, but the area is open for further exploration if you are up for the extra hiking. The path takes visitors through a forested ravine and ends with a giant boulder, pictured above and below. 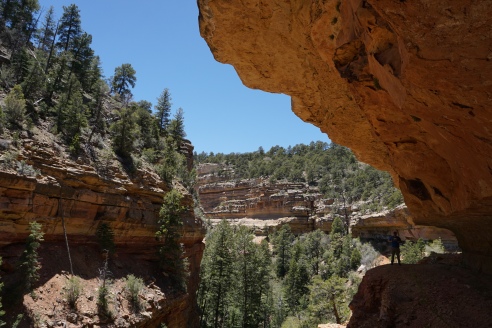 If you keep hiking, you will be rewarded with the view pictured below. The trail isn’t completely marked, but there is enough of a path to follow it through trees and branches. 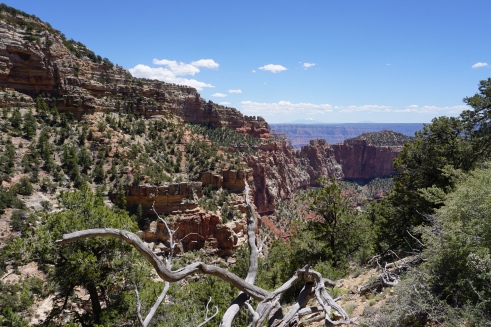 If you are looking for a longer day of hiking, check out Widforss Trail, which is 10 miles or about six hours roundtrip. The trail starts on a dirt road near the south end of Cape Royal Road and offers a blend of forest and canyon views. The Arizona Trail is also 10 miles long. Park rangers said it roughly parallels AZ 67 then connects with the North Kaibab Trail.

If your crew can’t handle a hike, but wants to see the park outside of the car tour, consider taking a mule through the North Rim. Park rangers said they are very familiar with the trails. They have the right of way on the trails, too, so if you see one make sure to move to the side.

Don’t miss the short hike and view from the Grand Canyon Lodge. Park officials have set up rocking chairs outside of the lodge for a spectacular sunset or sunrise outlook. For visitors willing to hike on a narrow, paved path there is the Bright Angel Point Trail, which starts at the Grand Canyon Lodge. It is only 0.5 miles long, but we saw many visitors stop in between from either the altitude or the steep distance down that is easily seen from the narrow trail. Making it to the end is worth it, though, since it is the only spot you can see the view pictured below.

Have you been to the Grand Canyon? Did you visit the North Rim or just the South Rim? What were your favorite sites?