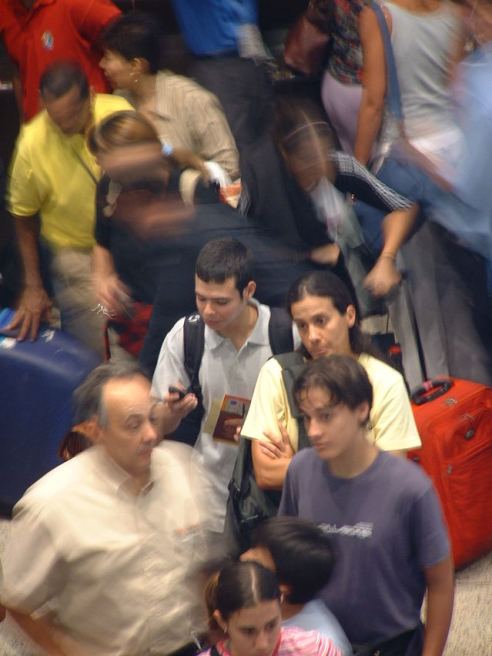 To help you prepare for the travel season, Being Abroad is bringing you various holiday travel posts over the next two months to make sure you stay organized, calm, and healthy. Here are a few tips on how to remaining calm during your holiday trip.

Scientists say that simply changing the topic can dramatically reduce anger in most people. When the long lines of people start to get on your nerves, pull out your phone and distract yourself with an e-book. You aren’t at the dinner table, so etiquette doesn’t demand you stare off into space while surrounded by strangers. An excellent book will shift your focus enough that you might forget you are at an airport with thousands (or millions depending on the city) of other people. Scrolling through Facebook, however, could make you jealous of your coworker who is already sipping wine fireside. In our family, everyone loads their smartphone, tablet, or computer with books and movies. After four straight days with family, you might need a few hours alone just to relax. A bit of solitude, especially in the middle of so much forced togetherness, isn’t going to hurt anyone.

I know what you are thinking, “Of course I am breathing!” A quick way to take a stressed out person to a calmer version of their earlier self is through deep breathing. You don’t have to trust me. Thank the scientists at Harvard who began studying ways to handle stress in 1971. Deep breathing, also known as diaphragmatic breathing or belly breathing, is when the air comes in through your nose and fully fills your lungs as the lower belly rises. If you’re a fan of yoga and have a good instructor, then you’re probably familiar with deep breathing. For those that don’t know, Harvard has a quick and easy guide here. The alternative, shallow breathing, leaves you feeling anxious and short of breath. Deep breathing also slows your heartbeat and lowers or stabilizes your blood pressure, scientists say.

Gratitude has got a ton of coverage in the press lately thanks to the rise of self-reported stress.

“Thousands of years of literature talk about the benefits of cultivating gratefulness as a virtue,” University of California Davis psychology professor Robert Emmons told WebMD.

Practicing and cultivating gratitude can quickly cut your stress. You can put gratitude into practice in a hectic airport or loud car. Take a moment or two to close your eyes, breathe deeply, and think about all the reasons you are traveling during the holiday season. They can be as deep as, “I’m thankful for a loving family to spend the holidays with” or as silly as “I am so grateful Sheila is hosting this year, and I don’t have to worry about red wine on our linens.”

The Zen masters over at Tiny Buddha have several articles on practicing gratitude, which you can view here. One of the tips we loved was partnering to spread the feel-good feelings. I especially like this idea when confronted with cranky children. Asking them to list three things they are thankful for is an easy way to keep everyone calm.

How do you stay calm while traveling during the holiday season? Tell us in the comments below.